State Demographer
Home > About Us 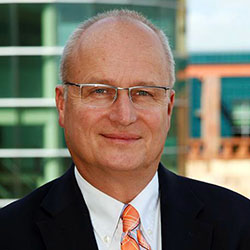 Dr. Lloyd B. Potter was appointed State Demographer on May 5, 2010.

Dr. Potter holds a Ph.D. in Demography and Sociology from The University of Texas at Austin, a Master of Public Health Degree from Emory University, a Master of Science in Education from the University of Houston at Clear Lake and a Bachelor of Science from Texas A&M University. He is a professor in the Department of Demography at The University of Texas at San Antonio where he also serves as the director of the Institute for Demographic and Socioeconomic Research (IDSER). He has extensive experience working as an applied demographer in several settings. His current research focuses on public policy and health related demographic topics and training applied demographers.

The Texas Demographic Center (previously the Texas State Data Center) was initiated in 1980 to establish a state level liaison to the U.S. Census Bureau for better dissemination of Texas census data. In the mid-1980s, the Texas Population Estimates and Projections Program was established with the overall objective of providing annual estimates of the population of Texas counties and places and biennial projections of the population of the state and counties.

The Texas Demographic Center is part of the U.S. Bureau of the Census State Data Center Program, a national network of 52 centers (all 50 states, Puerto Rico and the Virgin Islands), and started in 1978. The State Data Centers (SDCs) are official sources of demographic, economic, and social statistics produced by the Census Bureau. The SDCs make these data accessible to state, regional, local and tribal governments, and non-governmental data users at no charge or on a cost-recovery or reimbursable basis as appropriate. The SDCs also provide training and technical assistance in accessing and using Census Bureau data for research, administration, planning and decision making by local governments, the business community, and other interested data users.

Data provided by the Census Bureau for Texas and the estimates and projections generated by the Texas Demographic Center are available through a network of 36 organizations across the state affiliated with the State Data Center program. These include one lead agency, three core agencies, eight state affiliates, twenty-three local SDC affiliates, and ten BIDC affiliates. In general, local affiliates are the frontline service providers for printed data; state affiliates provide computer information; and core agencies have specific technical functions and provide backup to other parts of the system.